An Italian region to discover: Apulia 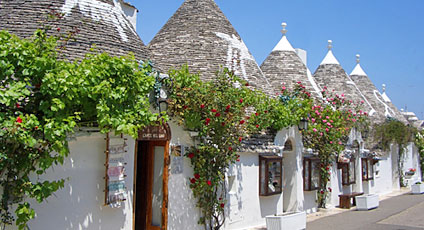 Arrival at Bari airport and transfer to Alberobello (not included). Accommodation in a “trullo”, typical local structure, located in the historic centre of Alberobello (or if you prefer in a 4 * hotel in Alberobello or surroundings). Accommodation and overnight stay. Possibility to rent a car, at your disposal for the entire stay to move freely in the region.

After breakfast departure to visit the city of Alberobello, a characteristic rural town in the Murge area famous for its Trulli (ancient stone structures). These old cylindrical structures, typical of the southern Apulia, are generally made by tuff or limestone and their roofs are of conical shape. We cannot say with certainty which Apulia’s oldest Trullo is because, during the years instead of being restored, the buildings were demolished and reconstructed. What we can say for sure is that the most ancient Trulli structures were located here in the Murge area and were built in the 16th cen. In particular the Trulli of Alberobello are inscribed on the World Heritage List of UNESCO. Visit to a winery and tasting  without guide. Free afternoon. Possibility to visit the Caves of Castellana. Back to the hotel and overnight stay.

Breakfast and departure for a full day excursion (by your own means) to explore the beautiful cities of Bari and Trani. Guided tour of Trani, where you will visit the Romanesque Church of St. James, with its carved portal and the Cathedral, one of the finest examples of Romanesque architecture. Free lunch. In the afternoon departure for Bari to discover its historical centre and the Basilica of San Nicola, a beautiful example of Apulia Romanesque architecture, the Cathedral and the magnificent Castle (outside). Back to the hotel. Overnight stay.

Breakfast and departure (by your own means) in direction of Matera, in Basilicata. Site of the Unesco, the city is famous for its “sassi” (rocks), old structures  and dwellings divided into two districts and partly dug into slabs of ‘tufo rock’. Guided tour of Saint John the Baptist’s church (entrance fee  included) and the Cathedral with Baroque interior, next to it you will find the Historical Museum of Sacred Art with furnishings of artwork. Through panoramic routes you will arrive at the church of Saint Lucia alle Malve, carved into the rock and dating from the XI century.  The tour continues with a visit to a typical house and a shop of handicrafts carved into the rock. Possibility to visit the underground caves dating back to the XVII century (entrance fee NOT included). Stop in a typical bar built into the stone. Back to the hotel. Overnight stay.

After breakfast departure in direction of Lecce (by your own means), main town of the Salento area and also called ‘The Florence of the South’ because of its spectacular architecture. The ancient origins and the Roman ruins contrast with the richness and the exuberance of the churches and the structures in Baroque style, generally dating from the XVII century. Most of the architecture and the enrichment of the facades with decorative elements has been developed particularly during the Kingdom of Naples, and has really changed the appearance of the city, so that it is called ” Baroque Lecce “. Visit of the church of S. Croce (Baroque style), the historical centre, the Cathedral and finally the Roman Amphitheatre. Free lunch. Accommodation in a 4* Hotel located in Lecce or in the surrounding area. Overnight stay.

Breakfast and departure (by your own means) in direction of Otranto. Located at the eastern end of the peninsula of Salento, Otranto was a Greek city, then Roman, the culmination of the Via Traiana (Trajan road) and the nearest port to Piraeus and Greece. Under the Byzantines it became the capital and stronghold of the Salento. Free lunch and in the afternoon continuation to Gallipoli. Sightseeing tour of the city. The city is spread over the Ionian Sea and is divided into two parts: the village and the historical centre. The town is situated on an island connected to the mainland by a bridge of the XVII century, at 12 meters above sea level. It’s a picturesque town, surrounded by high walls built to defend the attacks from the sea. Among the main activities there is a thriving fishing: do not miss the fish market, located right below the bridge, opposed to the castle. Gallipoli was included in the “indicative list” of UNESCO, pending any recognition as a world heritage site. Free lunch. Return to the hotel. Overnight stay.

Breakfast at the hotel and departure (by your own means) in the direction of Castellaneta Marina to visit an organic farm in the heart of the countryside of Castellaneta Marina where, thanks to industry experts, you’ll get to know more on the subject of sustainable agriculture, peculiarities of the territory, seasonality of production . The tour includes the experience of seasonal products’ harvest, a visit to the laboratory with a  demonstration of the processing techniques and the tasting of food products processed in the farm . After the visit, lunch with typical products. Back to the hotel and overnight stay.

After breakfast departure (by your own means)to Bari airport. End of our services.